The Collection of RMHP Final Reports just expanded with the addition of a second title, this time by Mary Brush, FAIA, Fellow 2005. This publication was made possible by the Sondra & Charles Gilman Foundation.

Based in Chicago, Illinois, Mary worked in prestigious firms such as Holabird & Root and Klein and Hoffman before starting her own firm, Brush Architects, LLC. Her academic background is brilliant: a Master of Architecture from the University of Illinois at Chicago in 1994, an M.S. in Historic Preservation from PennDesign in 1991, following an undergraduate studies in architecture at William Smith College in Geneva, New York. 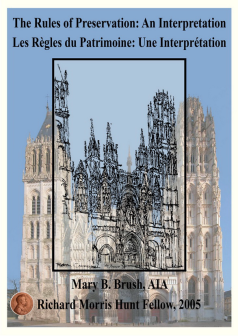 As Walter J. Hainsfuther, FAIA, of Design Team, LLC, writes, “Mary has been recognized internationally for her work in preserving historic structures, with a particular emphasis on the building envelope, over her entire career”. Her career perfectly illustrates an idea evoked by 2013 Rome Prize laureat Tom Mayes: “The notion that old places matter is not primarily about the past. It is about why old places matter to people today and for the future. It is about why old places are critical to people’s sense of who they are, to their capacity to find meaning in their lives, and to see a future.”

Mary, with the sensibilities drawn from her French roots, has always been attracted by France. The Richard Morris Hunt Prize has given her the possibility of increasing her knowledge, of exchanging and finally sharing it. In this way, she fits perfectly with our goal.

We wish to recognize to the patient and dedicated technical work of Javier Guillén Jimenez, who was able to format the original 2005 document and adapt it in the two languages for publication on this website. He deserves all our thanks.