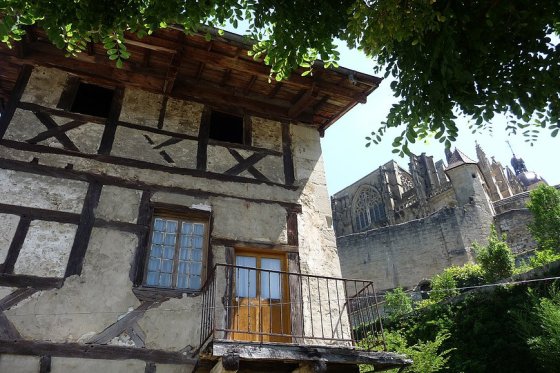 View toward the Abbey of Saint Antoine in the Isère region, one of the sites studied by John Robbins in 1990.

We are pleased to annonce a new title in the digital library of RMHP Fellows’ and Scholars’ Final Reports, thanks to the generous support of the Sondra & Charles Gilman, Jr. Foundation.

In 1990, the first Richard Morris Hunt Prize laureate wrote “the traditions for the historic sites and monuments are different in France than in the United States. In France they are mainly works of art and architecture; in the United States, they are principally monuments of political and social history. A subtle but important difference. Both American and French preservationists have a lot to offer and the exchange made possible by the RMHP is an excellent beginning”. What foresight, John.

That was almost 30 years ago! There are now 33 laureates. What human wealth, friendships made, professional enrichment and progress. The research projects undertaken by the laureates are more and more concerneed with the problems of tomorrow’s architecture. Each year brings new possibilities, an aid to the profession, illustrating the RMHP motto: “Innovate to preserve”.

John Robbins is Deputy Administrator at the National Gallery of Art in Washington, D.C. He was first trained as an architect at the University of Virginia, and later worked for the National Park Service. This year, John was elected to the ICCROM executive committee. To learn about his career and ICCROM nomination, follow this link.

JULY 2017 – Currently conducting research travel in the United States, 2016 RMHP Fellow Lucas Monsaingeon was recently hosted in Chicago by 2005 Fellow Mary Brush, FAIA. In a fine example of RMHP network activity, Mary and Lucas were led on a tour of Chicago’s bridges by engineer Stan Kaderbek. Lucas was named Richard Morris Hunt Fellow in December 2015, after presenting the Paris jury with his research proposal, “Bridges: Monuments Balanced Above the Void.”

At the 5th International Congress on Construction History which took place at the Palmer House Hilton Hotel in Chicago from June 3 to 7, 2015,
END_OF_DOCUMENT_TOKEN_TO_BE_REPLACED