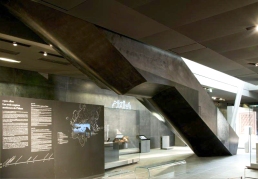 By Courtesy of Media Library Lafarge 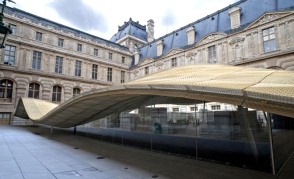 By Courtesy of Media Library Lafarge

The Cité de Chaillot is honoring the work of RUDY RICCIOTTI, well-known for the use of concrete in his conceptions. In 2006, Mr. Ricciotti was awarded the National Grand Prix in architecture. In 2006 he designed the Villa Navarra near St Tropez and since then has undertaken large projets such as the Department of Islamic Art at the Louvre (2012) the MUSCEM in Marseille 2013) and most recently the Jean Bouin Stadium (2013).

His work has to be linked with the Richard Morris Hunt Fellowship’s values, which encourages excellence, and enhancement of the architectural heritage through contemporary creation. No better example can be founded, than the harmonious insertion of the “Pavillon des Arts de l’Islam” in the “Cour Visconti – Lefuel”, the very heart of the Louvre Museum.

The exhibit features scale models and moulds of his work, which illustrate the use of concrete is his designs giving food for thought on the career of this exceptional architect.. The exhibit is sponsored by the Lafarge Company which works closely with this gifted architect who uses such innovative building material. 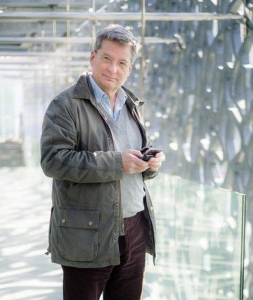 Léopold Lombard,
director of relations with architects at Lafarge

Leopold Lombard, the Director of Relations with architects, talks of Rudy Ricciotti’s work and his place in architecture today. Lafarge, a major sponsor to the RMHF, has always backed the various actors in architectural innovation.

Why did Lafarge sponsor Rudy Ricciotti’s exhibit at the Cité de Chaillot?

We have been collaborating with Rudy Ricciotti for over 15 years now,, making new material and techniques available to him. This exhibit features 30 projects tracing the creative career of Mr Ricciotti, a pioneer and ambassador of the use of concrete in architecture.; ultra-thin bridge beds; concrete webbings, white shells, black skeletons. Rudy Ricciotti has given every color and every shape to our concrete. He is also a pioneer i n believing in the potential of our high-tech fibre concrete, DUCTAL, bt using it in the construction of the Peace Walkway-in Seoul, Korea. It is, therefore, normal and important for Lafarge to support this exhibit dedicated to him.

What is the role of Rudy Ricciotti is positionning Lafarge in the architectural world?

For over ten years now Lafarge has been innovating and Rudy Ricciotti has been an ambassador for the new forms of concrete. He has been a precursor to many architects, a leader in the audacious use of these new materiels.

How does Lafarge collaborate with these architects?

We start at the very conception of a project and accompany the architect until its completion, suggesting innovative solutions and modifying our products to better fulfill their imagination. »