According to its biannual tradition, on December 1st, 2017, the prestigious RMHP Jury met in the salons of the Embassy of the United States of America’s George C. Marshall Center, situated in the historic Hôtel de Talleyrand on the Place de la Concorde in Paris. Chaired by Jeffery T. Potter, FAIA, President of Architects Foundation (AF), the Jury selected two French architects specialized in historic preservation for the prizes of 28th RMHP Fellow and 5th RMHP Scholar. 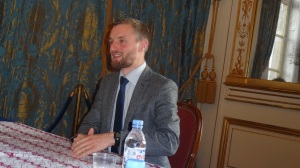 Sixte Doussau de Bazignan, recipient of the 28th Richard Morris Hunt Prize Fellowship, presented a research project for a six-month voyage to the United States on the subject of Climactic Emergencies and Heritage Preservation: Prevention and Action. 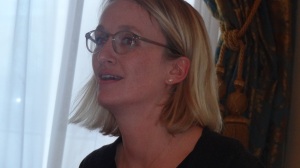 Pauline Voisin was named 5th RMHP Scholar for her research project entitled The Contribution of Digital and Scientific Tools to the Diagnostic Study, Conservation, and Maintenance of Built Heritage: The Example of Remarkable American Houses.

Follow this link to learn more about our newest laureates

Sixte Doussau de Bazignan is a graduate of the École Nationale Supérieure d’Architecture de Lyon, and is also a qualified engineer with training from the École Centrale de Lyon. His professional experience began among major public works projects focusing on railways (AREP, Bouygues…). He fine-tuned his architectural training with a graduate degree in Historic Preservation from Paris’s École de Chaillot. In 2009, he began collaborating with the agency ARCHI Euro Conseil – Didier Repellin, ACMH (hon.) – known as RL&Associés since 2014 –, a firm in which he is now partner.

His research topic is rooted in current events, particularly phenomenon of certain threats posed to historic environments with incontestably increasing frequency today. He has a dual interest: first, in techniques for stabilizing historic elements made vulnerable by age or neglect, and, secondly, in new approaches to address the contemporary problems associated with natural and climactic catastrophes. This second field is sometimes poorly understood, but the list grows longer every day since Hurricanes Katrina (New Orleans, 2005) and Sandy (New York and New Jersey, 2012), or the earthquake at Aquila (Italy, 2009) where Sixte had the opportunity to participate in restabilization efforts.

His study topic therefore proposes broadening the field of enquiry surrounding new response methods for emergency situations in regard to the stabilization of buildings and affected zones, as well as the creation of systems for future protection and prevention.

Pauline Voisin, after earning an architecture degree (AE) in 2012 from the École Nationale Supérieure d’Architecture de Paris-Belleville, defended her thesis for qualification to practice in her own name (HMONP) in 2015. Pauline also completed a graduate degree in Historic Preservation from Paris’s École de Chaillot (Neimeyer Promotion, 2014), all the while pursuing various training modules at the Centre National des Arts et Métiers (CNAM) and a masters degree in Architectural Conservation and Sustainable Development in Gothenburg, Sweden, through a UNESCO partnership.

After an early volunteer experience at the Phillips Collection in Washington, D.C., Pauline pursued further internships before finally joining the firm of Pierre-Antoine Gatier, ACMH, where she was soon named Project Head. She has overseen jobsites such as the Church of Saint-Germain des Prés in Paris, the Petit Château and Grand Stables at Chantilly (a property of the Institut de France), the Ephrussi Villa, and many other prestigious buildings including city mansions, factories, housing developments and foundations. She teaches courses at the École Nationale Supérieure d’Architecture de Val-de-Seine and frequently participates in conferences and exhibitions. She is actively involved in the Association des Architectes du Patrimoine.