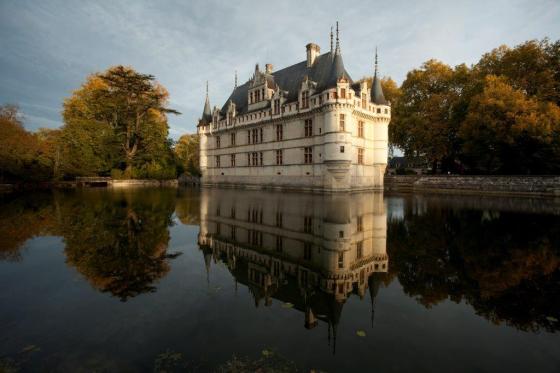 The Centre des Monuments Nationaux (CMN), under the impulse of its President, Philippe Bélaval, is restoring the Château of Azay-le-Rideau, a gem in the Loire Valley.  The site has been on UNESCO’s list of World Heritage monuments since November 30, 2000. This 16th-century « venerable lady », built on an island in the Indre River between Chinon and Tours, has remained remarquably authentic, probably as the King François I knew it.

Benefitting from a 7 million-euro allocation, the work began in 2015 under the supervision of Arnaud de Saint Juan, Inspecteur en Chef de Monuments Historiques.  He estimates three years necessary for completion and foresees 100 years of prolonged life for the château.

Roof, framework, the façades and the ground-floor interior decor will all be restored.

The slate roof is in great danger. A lack of sealing is threatening its frame.  The magnificent structure, similar to the overturned hull of a boat, is of oak-trees from the royal forest of Chinon. The beams, from trees probably cut during the winter of 1518-1519, will be reinforced.  Thanks to modern dendrochronological investigation, these dates can be seriously considered accurate.

The slate quarry at Trélazay, operating in western France for centuries, had to close recently. Similar slate from Galicia in Spain, will be imported and held in place by copper nails, in accordance with the original technique.

The lead finials are remarkable, dating back to the 16th century or copied from the 19th century…they are 6 meters tall. Traces of polychrome decoration (plants, monsters, heraldic) were revealed during removal of the old roof. They will be reproduced.

The “tufeau” sandstones , so specific to the Loire Valley, give  a luminous radiance to the façade. They have suffered from time, rust from the iron dowels and early 20 century restoration. The plaster used proved to be inadapted to the stone as well as the mortar which was too hard and too waterproof.

The aim of the present restoration is to preserve the original building material thanks to modern techniques. If absolutely necessary certain stones may be replaced but, if possible, the work will be limited to cleaning by laser or with a diamond-encrusted tool or consolidated by silicate.

Where the sculpted elements have disappeared they will be replaced using 16th-century methods. Research from the Centre de Recherches du Laboratoire de Champs will dictate the decisions to be made.

But restauration will not stop there. The CMN is determined to refurnish the ground floor. Before it was purchased by the government from the Marquis de Biencourt in 1907, the château had been completely stripped.  Fortunately the family had many photographs taken in 1897. With this documentation, the CNM plansto recreate the 19th-century decor incorporating existing elements (monumental chimneys, French ceilings, but also, thanks to an unprecedented agreement with the Mobilier National (National Furniture Service) signed by Bélaval, much of the pieces of furniture, the works of art, similar to those in the photos, will be put in place. Restoring the luxurious comfort atmosphereof the receptionrooms.

A daring innovation:  Visits remain open during the restoration. The public will thereby be able to follow the work in progress, understand and appreciate the techniques employed.

The reception rooms opened to the public on February 4, 2016.  The other rooms Billiard room, library, dining room, kitchen and outbuildings will be refurbished, and open by 2018.

The “venerable lady”Azay-le-Rideau brought back to youth, will regain all the luster of her elegant past, thus demonstrating the vivacity of thesestill loved monuments who, far from dead, stay so much alive, along time passing by.