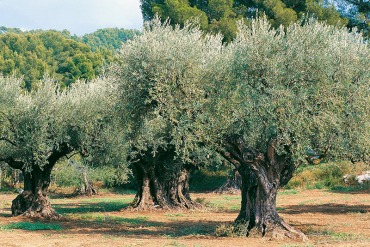 “Patio” and its “sail” protecting it from the heat of the sun.

Photo of the so-called “Well Corner”

A general view of the factory and transport section 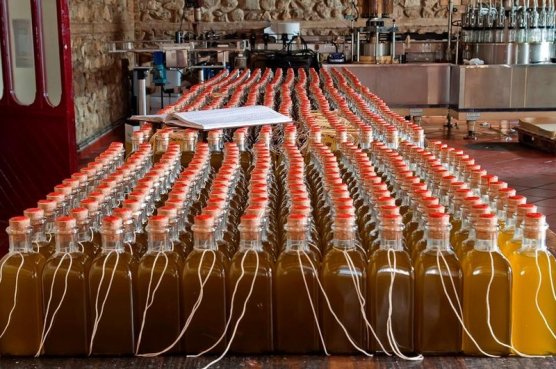 View of a collection of extra virgin olive oil, “La Flor de Aceite”, destined for gourmets all over the world.

Having lived in this property for seven generations, the descendants of one family, Paco Nunez de Prado and his two brothers Antonio Luis and Felipe have worked together, constantly restoring the estate to perpetuate the know-how of running an olive oil business situated in the heart of Andalucia, in the area around the little town of Baena.

Visitors to the factory admire the aesthetics of the area as much as the modern technology which has recently been added. Here they distil a refined and ecological Virgin Olive Oil.

This would consist of: olive trees, olives, a mill, a press, a distillery, and earthenware jars for conservation before the bottling process.

The harvesting of olives is always done very meticulously by hand, one tree at a time, never picking up the olives which have fallen to the ground.

The metal beams of the roof join the sumptuous columns of steel in a striking fashion. These columns are vats which today ensure the preservation of the oil and replace the TINARES (the former earthenware jars) which are still used in the family cellar.

The ancient family oil cellar, is in the original building which is painted in the typical Andalucian colours of today. “Andalucian White” actually dates from the very beginning of the 17th Century, when it was believed that “whitewashing” buildings eradicated the miasma of the great plague.

Half buried in the ground, the earthenware jars are whitewashed, as are the walls of the cellar with exposed beams.

The genius of the olive growers is to have been able to adapt the distillation of olive oil to modern times, whilst maintaining the ancestral family traditions.

Olive growing is still not well known, even though “Olive Oil” has been available since ancient times.

To produce the best nectars descended from Spanish olives is and always will be the inherited duty of Paco Nunez de Prado, his brothers and his family.