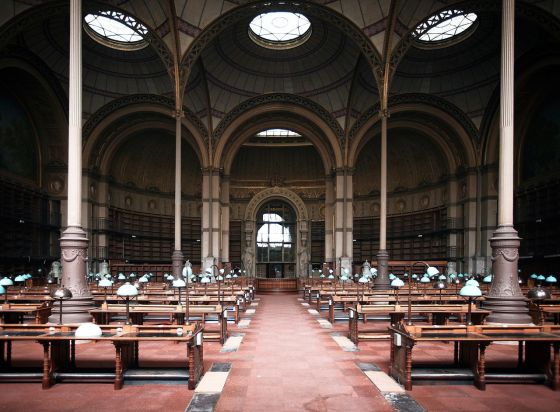 This bilateral collaboration will continue through the spring of 2013 when the exhibit opens at the MOMA. New York. (March 10 – June 2, 2013)

It is for the first time that such a double homage is paid, on both sides of the Atlantic to this leader of of romantic architects, much admired by Viollet le Duc, but far less well known.

Moreover, Labrouste not only left a deep imprint on the French architecture of his time, he also attracted the attention of his profession in the United States. Let us not forget that Labrouste was recognized as a member of the prestigious association the American Institute of Architects (AIA).

He was certainly a source of inspiration for Richard Morris Hunt, Charles Follen McKim (Boston) and Louis Sullivan but also Henry-Russell Hitchcock. All enthusiast admirers of the architectural innovations illustrated in the two Parisian “Bibliotheques”, Labrouste’s chef d’oeuvres: the reading room of the Bibliotheque Nationale and the Bibliotheque Sainte Genevieve.

Labrouste incorporates traditional art and materials- stone, wood, glass, sculpture and paint- which he audaciously combined with new materials – caste iron and iron. His vision of a new approach to lighting is original. He takes advantage of new technologies permitting to play thanks to glass canopies with the zenithenal light, at night having recourse to gas light, so innovator, as for example at the Bibliotheque Nationale. Its reading room, landmarked monument, whose renovation is scheduled for completion in the spring of 2014, together will be with the Bibliotheque Sainte Genevieve, a key architectural iconic model along been a “temple of knowledge”