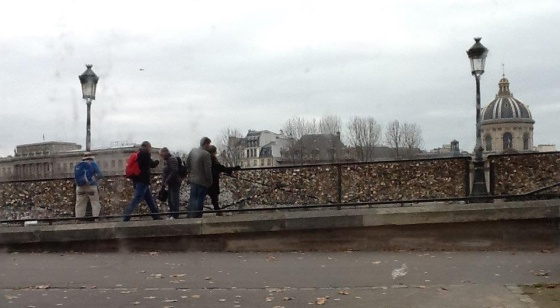 Bridges sagging under the weight of love locks…that is the slightly ridiculous parisian scene in 2015. It is the result of a new fad for couples to attach a padlock to a bridge guardrail to symbolize of the permanence of their love. It has become an almost obsessive gesture.

When did this begin? The fad began in 2008 as an egotistical (dual egoism but egoism non-thr-less)and rather pretentious (making a public display of personnal, private sentiments) sign. What started as a rather moving gesture, inspiring conspiring smiles, has now become an almost supernatural act. Obsession with padlock symbolism has become as contagious as graffiti.

But before analyzing how to cure the epidemic, we should follow its evolution.  The Pont des Arts was apparently the first structure hit by this sentimental tsunami…Locked forever as once closed the padlock key is dropped into the Seine below.   Why is this bridge called the Pont des Arts?  During Napoleons’ reign, between 1803 -1804, the architect Cassart connected the Palais des Arts (as Napoleon called the Louvre) to the left bank of the Seine.  We should note that this was the first metal bridge…could it be the magnetic potential that inspired the idea of attaching a metallic lock to such an eminent  structure?  The bridge was slightly modified when rebuilt in 1984;7 arches replaced the original 9.  The new bridge was designed by Louis Arretche and inaugurated by Jacques Chirac.

Despite révolutions, La Commune, political upheavals, and even when the Palais des Arts rebecame the Louvre, the Pont  des Arts retained its itentity. While not surplantuing the Eiffel Tower, it became a symbol of Paris.  It appears in poems, in songs (Brassens, Souchon and Julien Clerc, to name a few)  in litterature, television ads (Kate Winslet for Lancôme) and often plays a large role in movies to place the action in Paris.   Famous examples are “Le Fabuleux Destin d’Amelie  Poulain”, “Le Diable s’Habile en Prada” and more recently “ La Famille Bellier” whose last image is of lovers standing in front of the guard rail so heavily laden with locks that no light passes through.

Other bridges also attract love locks such as the Pont de l’Archeveché, le Pont Alexandre 111 and even the Leopold  Senghor foot bridge connecting the Tuilerie gardens to the Musée d’Orsay.  It is easy to understand the importance of a bridge as a symbol..the two banks permanently connected and, the riveted indestructibility of padlocks.

We can also assimilate the symbol so beautifully expressed by Apollinaire in his poem “Under the Pont Mirabeau”.…Hand in hand/lets stay face to face/as Under the bridge of our arms/pass the eternal weary looks.  But all that weight!  In June  2014 love was so heavy on the Pont des Arts that one of the guard rails came loose and sagged.  This caused considerable public  concern and was widely publicized by the press.  Love locks could become killers!

Originally moved by this sentimental display, the attitude of City Hall changed as it became aware of the damage caused by the accumulated locks.  The railings were repaced by transparent panels with no place to hook a lock. It then had the tentative but audacious idea of posting stickzrs on the Pont de l’Archeveché appealling to the sense of civic responsibility.  The text read “our bridges can no longer support your signs of love”.  Alas, eyes for only eachother, the lovers paid no attention and trampled the recommendation.  Another genial idea, in keeping with the current habit of “selfies” was to encourage immortalizing love by posting a message on Instagram or Twitter  “love without locks”.  But apparently digital love cannot compete with locked-up metal.

But let us broaden our horizons and see how people on the other side of the Atlantic feel about all this.  In her book “How the French Invented Love”,  a scholarly but amusing academic study, Marilyn Yalom decribes the accumulated love locks.  On the last page of her book she relates being enchanted by the sight and how Lucky she felt to have witnessed an enlaced couple cross the bridge, attach a lock and drop the key in the Seine during a passionate embrace.

In contrast, two American Parisian women have i nitiated  a movement to outlaw the padlocks and have created a petition on internet to that effect…”no love locks, free your love,save our bridges”.

To be eternal must love be locked up,or to dig deeper into the symbolism, shackled by chains? Couldn’t the bars on the bridge represen  bars on a cage or a prison locking up love?