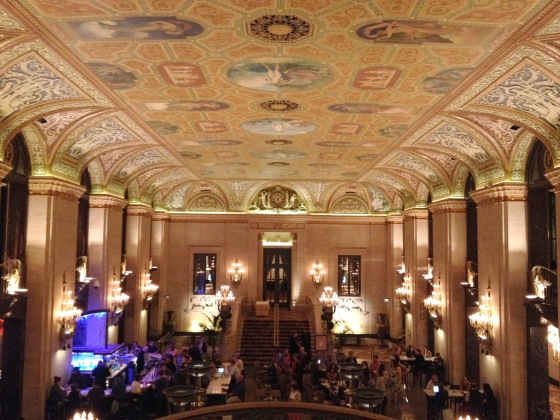 At the 5th International Congress on Construction History which took place at the Palmer House Hilton Hotel in Chicago from June 3 to 7, 2015,

Elsa Ricaud ‘(RMH Prize Fellow in 2012) presented the progress in her research on raw earth architecture in the USA to an audience of architects specializing in the restauration of Historic Monuments,engineers, archeologists and educators/researchers. Elsa proved that the adobe brick technique was not introduced to America by the Spanish colonists as was previously believed, but was already used by the indians (native americans) well before the arrival of the europeens. She explained the hybredization between the native techique and that of the spaniards, based on data collected by expert evaluation of over 70 buildings during her study. She presented statistics illustrating the evolution of the size of these adobes century by century. She thereby developed a new method of dating monuments for those working on these earthen edifices.
At the time of this exposé and as an introduction to the plenary session of the congress entitled “We Built Chicago”moderated by Mary Bush (‘RMH Prize Fellow 2005) the RMH Prize was praised by the organizing teams for its rigor and for the unique cultural, technical and human experience it offers to its Fellows/Scholars.
The next International Conference on the History of Construction will be held in Brussels in 2018.
Link : http://www.5icch.org